Communication Dividing The Body Of Christ 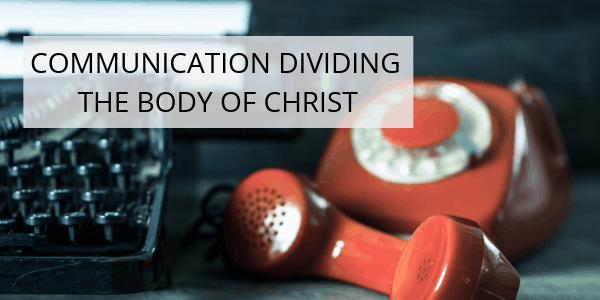 The Lord spoke to me in a dream about what is dividing the body of Christ. And how we are to recalculate so to be wise to the enemy's schemes.

I had a dream where I was on the phone with a good friend. We got interrupted and cut off. I got a call from the operator who was sent to give me a message from my friend. He said a few things at first which seemed ok. But one stood out and caused me to get angry. He said, “She won’t listen to gossip anymore, so don’t gossip.” I was so angry for two reasons. One, that she would send a difficult message like that through someone I didn’t know instead of telling me herself. Second, because I wasn’t gossiping.

I went across the street to her house to confront her on this. I told her she didn’t have reason to send me the message because I wasn’t gossiping. And she should’ve told me the message herself instead of going through someone I didn’t know. I also said I’ve worked on this issue in the past and was doing well. She was un-relentless and didn’t apologize. She said she was getting ready to go on a mission trip overseas and needed to set herself apart by going higher in her character. Then some other friends of mine came into the room and they heard both of our sides.

The body of Christ has been allowing the enemy to be the operator in our communication.

The enemy has cut off communication and wants to communicate on our behalf. There are people who have been wronged or accused by a close friend. That friend has allowed the enemy to communicate to you and you’ve felt the need to defend yourself. They are operating in a religious spirit that says in order for them to do ministry, they must cut you loose. They see themselves as better than you and you want others to take your side. This has caused great offense to come up in the body of Christ.

Here is what has happened and how we can come back into agreement with God:

1. We’ve stopped talking to one another about grievances and allowed the enemy to carry and communicate for us.

The operator in the dream is the enemy. He is the master operator of confusion and disconnection.

Our personal convictions end up becoming a tool to point fingers at one another. In other words, we’ve taken our personal convictions about sin and accused one another. We must take the log out of our own eye first. This isn’t being done in secret or behind our backs. Rather we’ve invited the enemy to communicate for us. The religious spirit blinds people to the sin of blameshifting and not taking responsibility for oneself.

Instead of using non-confrontational and passive-aggressive ways of pointing out sin, we need to get close and communicate in a way that the other person knows that they are still loved and valuable. We must recognize our own frailties and humbly admit we need help.

SOLUTION: Sometimes we are struggling with things and someone we walk with makes it harder for us to get out of that habit. God wants us to know that the person is in your life on purpose. He put us together so that we would be like iron sharpening iron and not one trying to hurt the other. The answer isn't to avoid that brother or sister but to help them. The Lord wants you to know that when He shows you something like this in yourself and you start to notice it in others, come alongside them and pull them up with you. But all this is done when there is no middle man, no opportunity for the devil to put his spin on it. We must get back to talking face to face. We can say, “Hey, I know we've done this (gossiped) together in the past but I want to go to a higher level and honor God and our brothers and sisters in Christ. Will you go with me?”

2. We’ve ghosted one another instead of embracing one another and thus given power to a religious spirit.

The woman said she didn’t want to socialize with a gossiper because she was going on a mission trip. At first glance, there seems nothing wrong with that. If someone truly does need to distance themselves from someone, then having someone else communicate that isn’t how daughters and sons of the King behave.

But God showed me that there was a religious spirit operating in relationships. People are ditching friendships because they feel called to a “higher” and to a more holy place. When in fact, if you can’t manage the relationships God’s given you already, you won’t be trustworthy with new ones. God brings us into a relationship with one another to do the work together. By trying to correct others without acknowledgment of also being in process, we allow pride in our hearts and declare ourselves better suited for ministry than others.

SOLUTION: The way we approach one another after doing it wrong once (or more) is key to restoring unity or causing division. We have the opportunity to say we are sorry and to unify what the enemy separated. God sees our desire to serve Him on a global scale but we can't go without one another. One may be the hands and feet but the other will be the finances. One may be the mouthpiece but the other will be the meeting place. He wants to show you that shoving others down won't be your path to going higher. But love is the key to being entrusted with influence and being sent to all the ends of the earth.

3. We’ve allowed ourselves to get offended by this communication and we've turned against one another.

When the two women couldn’t agree they brought in other people. Those people were uncomfortable. Both wanted to be heard and understood. But it was causing their issue to expand to others. When we don’t resolve our own issues between each other, we allow others to witness the disunity and they feel the pressure to take sides. This only causes further division. Offense weaves a story that causes tangles that are very hard to untie.

SOLUTION: The Lord knows there has been an orphan and outcast spirit that whispers lies to His to people. It makes the orphan feel despondent and alone and the outcast feel rebellious against those who shut them out. God knows the desperate need to fit in to find significance and acceptance. He is merciful and compassionate to all who fall prey to this tactic. He knows our offense comes from an unhealed place in our souls. He wants to show the world what it looks like to forgive even when the other person won't repent. To grow together. To show grace to one another. To build one another up. To share in each other's burden on the journey of sanctification. (Galatians 6:2-3)

If you’ve gotten to the place of offense, repent – first to God and then to the person. Don’t let the operator communicate for you any longer.

This is the season of restoration. God is bringing people who have been separated by the “operator” back together through repentance and forgiveness. He will restore friendships, marriages, ministries, and families. You will see a quickening of this in the next 3 months.

God is healing the areas of your soul. Some of you have felt alone, rejected and betrayed. Gossip has separated you from those you were meant to do life with. As God breaks all those strongholds, you must come into agreement with Him and choose to apply the healing balm of Gilead to those places in your soul.

You will need to be sensitive to your part in the process. Humble yourself before the Lord and He will exalt you. (James 4:10) He has plans to put you back to the place you were supposed to be before the enemy created a detour. He will show you that no time has been lost. Let your mind, will, and emotions come into agreement with the word that as far as it depends on you, be at peace with all men. (Romans 12:18) Before you leave your gift at the altar, go be right with your brother. (Matthew 5:24) Love one another as I have loved you. (John 13:34) If it feels hard to do this it's a lie from the enemy – God will open doors for restoration so all you need to do is walk through it.

The calling on your life will be made clear by your wilderness story. God will work all these things together for your good and His glory. (Romans 8:28) This will be a made so a testimony may stand and be declared.

Some of the greatest unifications are coming to the body of Christ in this next year! This movement will bring a change to the earth like never seen before. This is the forerunner to the revival and renewed hearts bent toward God that has been prayed for.