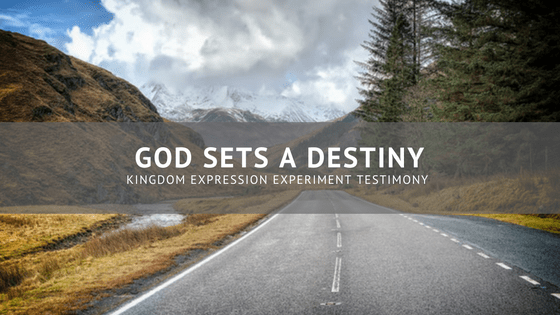 This is the post that started it all … I am a terrible blogger (at least to date) and I forget that what may seem normal for me on a regular basis may inspire others. After sharing this on Facebook and getting a lot of positive feedback I decided to start a new category on my blog for testimonies. I hope you enjoy hearing what God is doing.

In 2013-2014 I traveled across the United States in what I called the Kingdom Expression Experiment. I documented the trip with video and blogs. I'm on the road again in what I sometimes call my second missionary journey. I hope you enjoy the short stories of people I've met along the way. Follow me on Facebook to see photos and hear more testimonies of all God does to bring healing and freedom to those I meet.

Tonight I went to a movie by myself … I'm on the west coast and didn't have anything to do tonight. Against my new clean eating policy, I felt led to stop at Cold Stone just outside the theatre. The young man serving me was a little radical … dyed jet black hair, piercings, and jewelry. I heard the voice of the Holy Spirit telling me this young man is called to film. So I proceeded to tell him “I have a word for you from God … I promise it will be encouraging.” He looked at me with a critical eye. I'm pretty sure he didn't want to know what God had to say to him. When I told him he was made for film – directing, creating, behind the scenes but with a lot of influence. I told him he was created for a purpose and God gave him that creativity to accomplish that purpose. And when it gets hard don't give up. His eyes started filling with tears and he said “I've never had a customer do something like that before. That is actually my major.” Then the best part was I could say the only reason God would send a stranger in here to tell you that because he loves you. Little did he know that word had a cost … my clean eating diet! As I walked away I asked God since I did what he asked … would he make the ice cream have no calories!!? Sometimes I love being alone because I'm not distracted from what God is doing. I love it when God loves people!