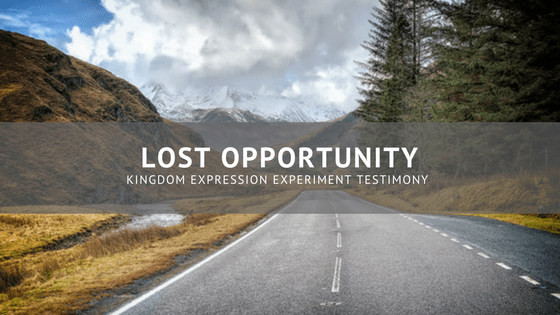 In 2013-2014 I traveled across the United States in what I called the Kingdom Expression Experiment I documented the trip with video and blogs. I'm on the road again in what I sometimes call my second missionary journey. I hope you enjoy the short stories of people I've met along the way. Follow me on Facebook to see photos and hear more testimonies of all God does to bring healing and freedom to those I meet.

I was walking down a busy downtown area and noticed a man dressed a little ragged but he didn't seem homeless. He has a portable radio, a new bottle of Coke and a simple backpack. He clearly has some mental issues as he talks to himself, curses as he hits another newspaper holder along the sidewalk and yells “Urgh, God.” I'd seen and avoided eye contact with him before. (Sadly and most recently, the day I avoided him was the day I posted something on Facebook about taking a little bit longer to smile at people.) He made me uncomfortable because I wasn't sure if he'd be unpredictably violent with me as he was with the newspaper stand.

From what I can tell, as I see him for the 7th day in a row, no one acknowledges him. But tonight I walked behind him and asked God what to do. I prayed for him and half expected him to turn around and curse me. I thought of the man in Mark 5:1-20 that lived naked among the tombs. I'm sure people had given up on that man too. A legion of demons were oppressing that man and Jesus delivered him. I had to confess to God that I wasn't confident I could help this oppressed man. I didn't stop to talk to him tonight. I realize it's not much of a testimony right now. But I pray for courage to talk to him when I see him next.