Time Of Refreshing For The Body Of Christ 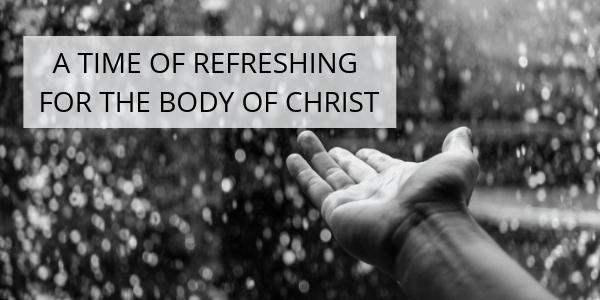 This will happen in these ways:

1) As the body of Christ learns her unique gifting and calling, she will emerge as her true self and impact the sphere of influence that was given to her. This will cause those in that metron to take notice and draw close to the anointing in order to understand their own purpose on earth. This isn’t just for the church mountain but in all areas like business, media, education etc. Those that haven’t been willing to hear about the good news of Jesus Christ, will ask for the reason for the peace and joy that is within them. The prophetic, evangelistic and pastoral functions will be sought after and accepted as leaders operate from the Holy Spirit inside of them. They will shine specifically in the marketplace. Knowing her identity in Christ, with a victorious and new covenant view (of self, the body, and God) will allow others to easily rest in the servant-hearted leadership of these people.

2) The age of “Christian-famous” will shift. No longer will the focus be on them but believers eyes will be drawn to personal encounters with God. A new hunger is arising in the body for private worship. People will appreciate the ministries of those who have public platforms but will seek out those in their community that can interact with them on a more personal level. Local leaders will make the same impact as they are put in place, recognized and affirmed in their gifts. It used to be that only those with publishing contracts and platforms were able to get their message out. But a season is upon us where the unknown person is gaining confidence to express what God has shown them. Comparison and competition will be replaced by affirming uniqueness and celebration of each other's gifts. There will always be a place for those on a platform, but God is giving increase to those that have labored among them.

3) Those that have been raised in the more traditional theology in the body of Christ will be seeking out the prophetic to learn how to hear the voice of God for themselves. A new level of discipleship will be recognized as those who have walked with God for years learn that there is more in God. They will begin to have dreams and visions and seek out the prophetic leaders to explain to them what they encountered. They will have situations that draw them to people who walk in this gifting and ask for prayer. Their eyes will be open to scripture in a new way and they will learn to declare the word of God over their lives – instead of just read the word and pray for their needs. There will be a great need for mothers and fathers in this movement as people unlearn religiosity and tradition. So that as they have questions and fears, they are comforted and encouraged by the prophetic influences.

4) There will be a spirit of humility, transparency and authenticity rise up among believers. They will mother and father those that are afraid to be seen because of past trauma and wounds from their experiences in the body of Christ. As leaders represent this new movement of the Holy Spirit, others will be raised up into leadership more quickly than we’ve seen in the past. The body must become a judgment-free place so others may ask questions, release fears, ask for insight … and those that are called to love these new emerging leaders, will be touched by the sensitivity and kindness of the Holy Spirit – encountering a new level of liquid love as they’ve never experienced before. Healing will come for those that take the risk to step out and are willing to learn. As they make mistakes they will be unconditionally loved and encouraged and therefore grow at an exponential rate. It will be very important for the body to know how to nurture in this time so others can represent the Holy Spirit’s compassion as these folks learn their authority in Christ.

5) Many people had a difficult few years of pruning and releasing things they could not keep or control. This process separated those who would embrace the process and those that refused to change. One of the key things that those who embraced the process came out with was a revelation of love through forgiveness. Those that hardened their heart have been prayed for and are not left behind. They will be given a new opportunity to reconcile themselves to God and others. Forgiveness must be exercised and bitterness must be repented of in order for them to have the next thing God has held for them. God wants to hand out next level assignments. He is inviting everyone who has allowed Him to break them free of strongholds and heal wounds to be a servant to those that didn’t embrace the process before. This is so the entire body will work together as one and in unity.

6) Revival is going to come through the business sector in this next season. Believers have felt powerless in the workplace and their understanding of how to stand up has been challenged. They will receive strategy from God but this won’t be in a stubborn argumentative way. It will be by extending love and walking by example. New ideas are being released to those that spend the time to listen to what the Father has for them. (Jer 33:3) Each person has a storeroom in heaven with everything they need to accomplish their assignment. This will be the way they change things. It will be an awe and wonder to those that have known them before and see this new release of wisdom on their business. They are being released to start businesses and will be known as the way makers in their stream. They will have greater influence with peers, develop partnerships and in return, people will respect their values. They will become the greatest philanthropists any generation has ever seen.